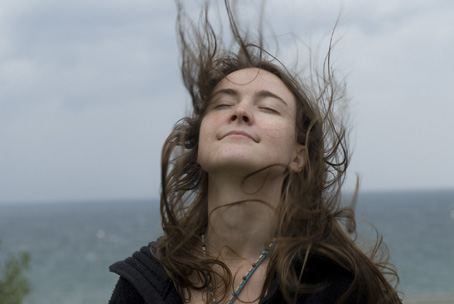 My name is Anna Blagaya, I am a violinist, journalist, author of “The Violinist’s Alphabet”, researcher and creator of several online projects.

My life before this moment went as follows.

I was born on the first of April 1978 in Moscow, to a literary and musical family.
In 1985 I entered the Central Music School under the Moscow Conservatory (formerly the Special Group for Gifted Children) to the class of Michael L. Vaiman. In 1996 I entered the Conservatory as the so-called “first number”.

In the last year of school and at the conservatory, in professor M.L.Yashvili’s class, I was carried away with the virtuoso repertoire by Paganini, Tartini, and Szymanowski. I created a topic for myself, “speeches on the violin” (this is what I called it). There are still outlines for articles and books from that time.

There is also a review of my performances that still remains by professor Irina Bochkova (1997):

“I have known Anna Blagaya for many years, starting from the time she was a pupil [of the Central Music School.- A.B.]. She is very interesting, an original musician, her performances always attract attention with their nobility, beauty of sound, technical skill and inspiration.”

In 2001 I finished my education at the conservatory with honours, a red diploma and a qualification as a concert performer, I then entered a solo graduate school where, under the leadership of professor S.I.Kravchenko, I started playing solo concerts.

The concerts were of program music (by that time I had long been drawn to the idea of creating arts, and perhaps even with a leaning more to literature than to music.):
“Three Centuries of Virtuoso Violin”, “From Bach to Schnittke”, “Theater”

I found the prospect of an exclusively musical “career” very burdensome and as a result, I refused a very flattering offer to teach a speciality in my native Central Music School as well as to write a dissertation at the conservatory on the methodology and history of violin performance (these offers were also very flattering, in relation to these texts). Instead, I dropped everything and started from scratch.

While still in my last year of the conservatory/in graduate school and having taken the pseudonym Ash in honour of the heroine of the cyberpunk film «Avalon», I built my first online project: a virtual maze about utopias and the synthesis of arts.

There, I found and displayed what would become an ordinary reality only 15-20 years later (for example, I collected “text-art and graphic poetry” on the pages of the site: back then it was a curiosity, but today even children are taught how to do it). I also posted my «sound photographs».

This was my «virtual» activity.

I was over the moon when my covert work was noted by the authors of the TV program «Download» — twice even. I found out about this in hindsight, I never saw the program itself, but the messages survived. Here is one of them:

“You must admit, it’s terrible when the ashtray becomes full. What can be said about the virtual «Ashtray»? She has nothing to do with bad habits, but is addictive, like smoking. This is because the author has filled it with both well-known and lesser-known utopias, examples of synthetic creativity and original sound photographs. The content on Ashtray.ru is very fresh. And we were flattered to get this link on the Download forum. «

The author of the program “Radar” on Mayak radio — to my great regret, I did not save her name — even wrote a large and very kind text about my creation, it was called: “The Wonderful World of Utopia”.

I am very grateful to these people, they encouraged me! In the “real” world, not the “virtual” one, it was generally believed that I was doing nonsense. I remember a musicologist I knew always sarcastically asked me: «Why?»

Once I get to know the world

In 2003-2004 I was an artist, creator and copywriter, as well as site administrator for a book publishing house. (I am proud to have written a script in XML, a language unknown to me, while working there). I studied at the Institute of Television and Radio as a producer, and in 2004 at the Faculty of Journalism of Lomonosov Moscow State University as a journalist (second higher education, international department).

This is how my childhood dream of writing came true. For several years I was an author and editor of various publications, for almost a year and a half I worked as an editor in a glossy supplement to the Vedomosti newspaper (in 2006-2007), I wrote materials about unusual objects and projects, I was in Paris and Florence, learning with amazement about a world that was completely new to me. (see, for example, The Sleep Suitcase)

I was not a music critic. And I didn’t write about music, except for material about unusual pianos. That is to say, I switched my focus completely.

A New Site: “A Violinists Alphabet”

One evening, for some reason, I picked up my violin again and (to my amazement), after a five-year break, I played Paganini’s First Concerto. It turned out that I still knew how to play. Even more so, writing had helped me in a new way — to play the violin in a way that “spoke” and sang, more powerfully and vividly than before. (I think this was because I had been working on phrasing all this time!)

This discovery could be dealt with in different ways. I decided to share it — I started building a violin site.

And since 2009-2010, with great enthusiasm, page after page, I wrote «A Violinist’s Alphabet». I often planned the pages of the site with a violin and bow in my hands.

Then I began performing again.

These were the new programs: Myths, Dances of the People of the World, Mood for Love, Concert dedicated to accidents.

In parallel with concerts and «A Violinist’s Alphabet», in the late 2000s and early 2010s, I travelled. I visited the East, gaining inspiration from these trips. I found these inspired me more than visits to European cultural capitals (see: travel)

I did not promote my site. I treated it rather like a letter in a bottle (at the time everyone believed that it wasn’t necessary). But still, it somehow found its way to people and they fell in love with it.

In 2011 I wrote this on my website: “More than two years have passed since the creation of this site. A lot has happened, I have undergone a pretty strong evolution. My projects now have about 25 thousand visits per month, blagaya.ru is the largest site about violin in Russian (and, perhaps, not only in Russian: readers from other countries write to me, telling me they do not have sites with so much information about the violin and so they use my site). The Violin Alphabet has gradually accumulated nearly 200 articles. I have received an offer to publish a book and I made my first recording in the studio.»

From 2011-2016, even then, people began visiting my site and asking questions, or, the opposite, informing me of my family’s heritage in the worlds of music and literature, they told me about their findings.

At first, I sent everyone to Leninka where, according to family stories, the archive of my grandmother who was a literary historian was kept. But it turned out that the archive was not listed in Leninka’s catalogue at that time. So, I decided to find it myself and carry out some research with the documents.

So I went to the RSL Archive. Then to the Department of Manuscripts, situated in the beautiful Pashkov House. I entered the hall with the inscription «for good enlightenment», scoffed, received the inventory of fund 792 in my hands, and … disappeared.

Some inexplicable coincidences began to occur in my life; facts, books, documents, all began to fall into my lap on their own accord. Some of these incidents could not be explained by anything but magic. It was impossible to ignore all this.

I humbly walked through the archives, putting aside my own affairs and plans for a while and I kept saying to myself: «Just a bit more to go, just one more document to look at …». But the days passed, one folder pointed me towards another folder, from one archive to another …

This is how I wrote the first version of the book about my grandma. I received an offer to publish my grandmother’s book, for which I again plunged into the archives and rewrote many parts, since, at that time, I knew much more. The accumulated information is sitting at home, in due time it will be published on paper. What was the name of the publisher, you ask? «Coincidence»!

Simultaneously, brick by brick, I was building the website blagoy.ru, dedicated to my father, a pianist and grandfather, a literary critic. The section about my grandfather on this site is the result of similar coincidences. I had no intention of writing it, but I caught sight of someone’s article about my grandfather which was rather stupid. After this I began stumbling upon his autographed books at home that directly refuted what was written in that article. This is how a large section on the website was formed, from which it became clear (first of all, to myself) what place my grandfather occupied in the scientific sphere and what the true attitude of his great contemporaries was towards him. At the same time, you could say, I met my grandfather. I had not known him during his lifetime.

By the time I got into this topic (and when it was believed that my work was complete nonsense!), the picture was as follows:

• Grandmother (father’s side), whom even the museum she created did not particularly want to remember her, they also managed to get rid of the documents from the time of her directorship (!)
• Grandfather (father’s side), the main work of his whole life disappeared after a not entirely understandable death (of which he also warned my father about in advance with a letter!);
• and my father, not recognized during his lifetime as he deserved. Fortunately, he left a large number of recordings — but nobody heard them.

I could not have known the first point in advance — I am not a literary critic. The second I understood only partially — I was not in possession of the documents. When I compared all the information and saw the whole picture, I realized that none of the time spent on this story had gone to waste, it was all worth it.

In 2016 my adorable daughter was born and for a while I completely forgot about all of my other projects. Parenting turned out to be the most serious challenge I had ever encountered. For several years my daughter had ‘night attacks’, the nature of which was not clear to the doctors. I had to decipher this mystery, the price of a correct answer was high, all while I was in a state of severe sleep deprivation. Fortunately, the concerns were in vain. Now this phenomenon has been described as a “night terror”, a harmless thing. That is all in the past now.

But a few years of such a life led to my complete exhaustion. Sometimes, when I looked at my writing, I could not understand what it said. That is, I did not understand how the words were combined into phrases in general… But I tried to do everything according to “Endlessly Dear Hours of Searching”, perfectly understanding that, if something were to happen to me, there would be no-one to complete this work. I simply did not have the strength to play violin.

What doesn’t kill you makes you stronger, right?

In 2020, during quarantine, I picked up my violin once again … this time, 7 years after my last performance.

And I discovered that I could still play Paganini.